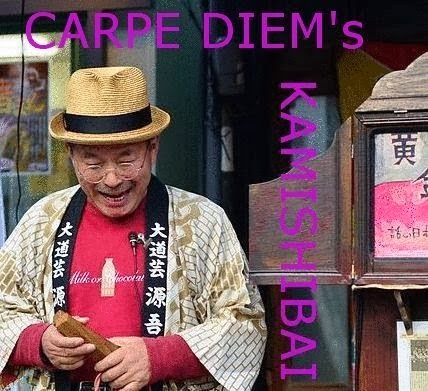 It's time for an all new episode of our Special feature on writing Haibun. This is our new episode of Carpe Diem's Kamishibai. Kamishibai (meaning 'storyteller') is a Special feature in which the goal is to write a haibun. A haibun is a short story or travelogue in which haiku are included. It's a classical poetry form which was performed for example by Matsuo Basho. Basho made ten (10) journeys through Japan and noted his adventures in a haibun. His most known haibun is called: "Oki No Hosomichi", "The Narrow Road to the Deep North", a great haibun about you can read more on our first weblog "Carpe Diem Haiku Kai".

The task for this episode of "Carpe Diem's Kamishibai" is to write a haibun about your neighborhood, must be easy ...

At least one evening in the week I walk through my neighborhood, just for fun. I love looking through windows at the people in their homes and in this time of year (around the december holidays) it's really a joy to do that, but in all seasons it's a joy. Here is my (short) haibun "my neighborhood".

It's almost around 10 PM (CET) as I walk through my neighborhood. It's a bit cold, a bright star-spotted sky and the almost full moon are leading me on my path. It's a few days before Christmas and in a lot of homes the Christmastree already has been decorated. As I walk on I rest a while looking through the window of one of my neighbor's. They are decorating the Christmastree and I can hear Christmas-songs through the open window of their kitchen. The windows are partly steamed. I hear the laughter of the young kids and the soft bark of a little dog.
As I look closer I can see that the female neighbor is pregnant ... and as I can see ... almost ready to give birth. She enjoys the look of her children as they are decorating the Christmas tree. Than a flash of pain goes over her face. She sits down and her husband looks at her. I can't hear what he's saying, but it seems that he's worried. His wife nods ... they leave the Christmas tree for what it is and ...
Not much later I hear that they are leaving ... she is in labour.

Several days later as I walk again through my neighborhood. I stop at the same house. I hear the sound of a new born and as I look closer I can see that this family is standing together around the Christmas tree ... singing Christmas songs. On her arms she holds a little boy. As I walk on ... it starts to snow. "This is how it's meant to be", I think.

really it's Christmas
a little child is born -
snow is falling


I hope you did like this haibun, it's not of this time, but I had to share it with you all. Now it's up to you. Write a haibun about "your neighborhood" and share it with us all. This "Kamishibai" episode is NOW OPEN for your submissions and will be open until February 12th 11.59 AM (CET).

Posted by Chèvrefeuille at 3:06 AM