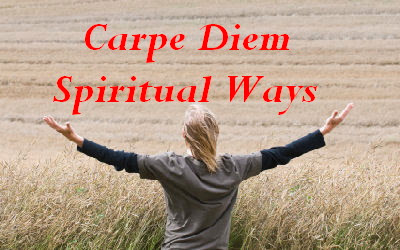 It's my pleasure to introduce an all new Special feature on Carpe Diem Haiku Kai Special titled: "Carpe Diem Spiritual Ways".
As you (maybe) all know, haiku has a strong connection with Buddhism. A lot of haiku have a Buddhistic layer and for example Basho, Issa and Chiyo-Ni (a female haiku-poet) were Buddhist, Chiyo-Ni was a Buddhist monk.
A few years ago I wrote a short essay about haiku for Wonder Haiku Worlds in which I stated that haiku can be read (seen) as a 'Koan', the impossible question which can give Enlightenment. I think that (all) haiku can really be seen as such a koan, but that's just my idea, my vision.
If you're a loyal 'follower' of our Carpe Diem weblogs than you know that we are on a journey to Shikoku which started this month with all daily prompts about the Trans Siberian Railroad straight through the Soviet Union and the next two months we will go on a pilgrimage along the 88 shrines on the Island Shikoku and I will tell you more about the Buddhistic 'rules' of haiku.

OK ... back to this new Special feature. I have named it "Spiritual Ways" and the goal is to write a haiku, senryu, tanka or kyoka with a spiritual layer in it. With this new feature I hope to promote the Spiritual Way of haiku and to make you all aware of that 'classical rule'  in haiku. I know it will not be easy, but that's the challenge. As Iread my haiku than I have written a lot of haiku with that Spiritual Way hidden in it. Sometimes even clear in my haiku, but mostly hidden beneath the surface of the haiku.

Let's give it a try to write, compose, a few haiku written with a spiritual layer. First I love to share a few oldies which I wrote in the years laying behind us.

lonely flower
my companion for a night -
I bow my head

In this haiku the deeper layer is the 'loneliness' and the 'selflessness' of a Buddhistic monk. I wrote this haiku as I was wandering through a big parc outside of the city where I live. I remember that it was a nice sunny late autumn day and I was completely alone in that parc. My thoughts went to a moment back in time in which I felt completely alone. It was not long after that my only brother died of lungcancer (1995). As my thoughts went on a run with me I saw a lonely flower between the bare branches. It was a, as we call it here in The Netherlands, a 'Hondsroos'  ('dog rose'). I plucked it and took it with me. As I arrived at my home there was nobody at home and I was completely alone, I had only that 'dog rose' and that comforted me.

Another one in which the 'Spiritual Way' was more clear I wrote in response to a photo of praying hands.


As you can read in both haiku there's a kind of spirituality in it and that's the goal of this new Special feature "Spiritual Ways" ... let me share another haiku for this new feature.

deep silence
only whispered prayers -
the scent of incense

I hope you did like this new Special feature and that it will give you joy and inspiration to write, compose your haiku, senryu, tanka or kyoka with a "Spiritual Way".
This Special feature will be open for your submissions until January 28th 11.59 AM (CET) and I will (try to) publish a new episode of "Spiritual Ways" that same day. !! This episode is NOW OPEN for your submissions !!

Posted by Chèvrefeuille at 6:12 AM